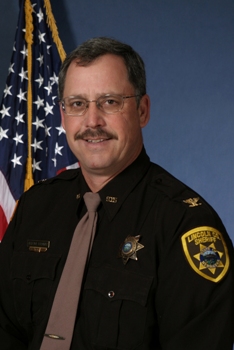 While working as a Deputy Sheriff, Jerome quickly obtained the rank of Sergeant and ultimately held almost every position that a Deputy Sheriff could. In addition to running a Patrol Shift for a number of years, Jerome was in charge of the Civil Division during the mid 1980’s agricultural recession and worked with countless numbers of agricultural professionals in their dire times. The Civil Division is one of the highest liability areas of any Sheriff’s Offices and Jerome was placed in charge during that time because of his tenacity and life-long agricultural background; Jerome understands the agricultural community and their needs.

Jerome Kramer also spent several years as the Sergeant in charge of the Criminal Investigative Division and was involved with innumerable major crimes including 1st degree sexual assaults (rape), child neglect and abuse cases and 5 murders.

Chief Deputy Roland L. Kramer (no relation to Sheriff Jerome Kramer) started his career in law enforcement in 1989 at the Wyoming State Penitentiary, Rawlins, WY.   In 1990 Roland completed the initial Detention Officer training through the State of Wyoming.   Later that year, Roland was offered a management position at the Airport Inn Restaurant in North Platte and was eventually promoted to General Manager, over 40 some employees.

In January 2007, Roland was chosen to lead the Criminal Investigation Division of the Sheriff’s Office.   Roland became the lead investigator on numerous cases to include; Sexual Assault Investigations of adults and children, Shootings, Homicides, Frauds, Thefts and Internal Investigations.   Roland worked very closely with the Lincoln County Attorney’s Office and helped develop a strong working relationship with surrounding law enforcement.

In May 2011, Roland was promoted to Operations Lieutenant by Sheriff Jerome Kramer.  His duties were to supervise all Deputies and supervised the moving from the old Sheriff’s Office and Detention Center into the facility.   On August 1st, 2011 Roland accepted Sheriff Kramer’s offer to become his Chief Deputy.    Roland is now assisting Sheriff Kramer in the supervision of the Detention Center, all Deputies and Clerks.

Lt. Dan Newton started his career in law enforcement with the Goodland Kansas Police Department in May of 1993. He graduated from the Kansas Law Enforcement Training Center and worked in the patrol division at Goodland before accepting a job offer from Lincoln County Sheriff Duane Deterding and moving back to his home town of North Platte Nebraska.

Dan started his new position with the Lincoln County Sheriff’s Office on January 2nd, 1995. A graduate of the Nebraska Law Enforcement Training Center in 1995, he  was assigned to the patrol division. Dan became a certified Accident Reconstructionist in addition to serving in Bike Patrol, the multi-agency Honor Guard and being a K-9 officer for six years serving with K-9 “Hasso”.

Dan is a second generation Law Enforcement Officer serving Lincoln County. His father, Roy Newton, served with the Lincoln County Sheriff’s Office from July of 1973 to August 1984. Roy achieved the position of Chief Deputy for Sheriff Hop Gilster and worked for Sheriff Deterding before retiring.

Click here for the History of the Sheriff’s Office.