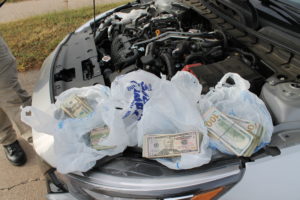 On September 29, 2021, a Deputy stopped a vehicle southbound on U.S. Highway 83 at mile marker 102 for speeding. The Deputy smelled the odor of Marijuana and searched the vehicle. No drugs were found in the vehicle, but the Deputy discovered $12,740 in the vehicle. The driver claimed he was going to California to buy a car. The money was seized and the driver was released.

On September 30, 2021, a citizen called the 911 Center to report a vehicle driving all over the road, southbound on U.S. Highway 83 from Highway 92. The vehicle’s license plate was given as well as a good description of the vehicle. A Deputy observed the vehicle coming into the city limits of North Platte, NE and stopped it at U.S. Highway 83 and 13th Street. The Deputy smelled the odor of raw and burnt Marijuana and searched the vehicle. The Deputy recovered $30,630.00 in the engine compartment of the vehicle. The driver said the money was not his, he was released and the money seized. The investigation in these matters continues.